We Know About Snow

As a Vermont-based company, we know snow, and we know that solar panels covered with snow don’t do anyone much good. Solar on rooftops or on fixed panels on the ground may continue to produce some power with a coating of snow, but they may lose up to 15 percent of their annual potential production due to snow cover.

Trackers don’t have that problem.  Why? It’s a gravity thing.  First, the winter sun is already low in the sky so a solar Tracker’s panels are already a steep surface since they’re always pointed right at the sun, meaning the snow will naturally slide off quickly. And second, a solar Tracker ‘sleeps’ vertical at night, facing east waiting for the sun to rise and to begin tracking again. So any remaining snow from a daytime snowfall slides off, and any nighttime snowfall isn’t landing on a Tracker’s solar panels.

For further proof, just look at the power production on a 4 kW Solaflect Solar Tracker during February of 2015, one of the coldest and snowiest Februaries in memory, and a month during which rooftop solar panels were covered for over three straight weeks. 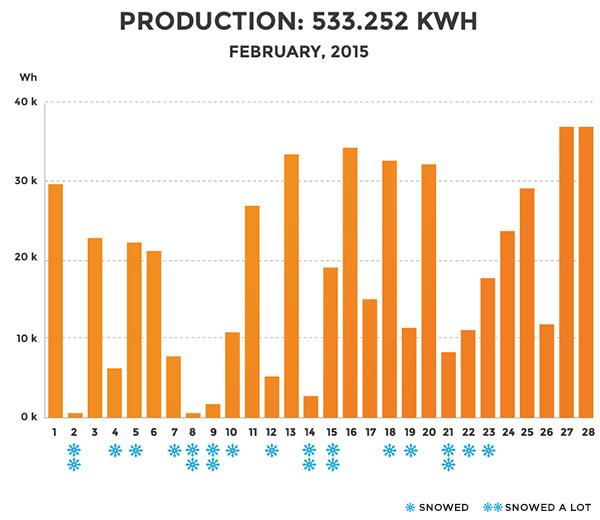 Tracker mounted solar panels get back to work fast, and they make the most of the limited sunlight during short winter days. Click here to learn more about the increased efficiency of tracker mounted panels any time of year.

We love talking about all things related to solar, so please reach out to us or call us at (802) 649-3700 if we can answer questions and help you think about how solar can cover an ever-increasing share of your family’s power usage!