The Winters we Love are in the Crosshairs

Many of us live in Northern New England because we love the winter recreation that the region offers, and many others discover that the winters are long unless one embraces the recreational opportunities provided in the region. However, these recreational pursuits are in peril. A new article from Climate Central (“ON THIN ICE: How Climate Change is Shaping Winter Recreation” — https://www.climatecentral.org/…/report-on-thin-ice-climate…) shows that we are in the crosshairs.

Winters are heating up, with serious consequences for America’s cold-weather sports economy. To many Americans, a mild winter may seem like a pleasant prospect. This article refers to Burlington, VT as one of the most rapidly warming winters, with the winter average temperature increasing 7 degrees from 1970 to 2018.

Of course at Solaflect, we believe that solarizing our lives is one of the fastest and most impactful and meaningful ways to slow the rate of climate change for the benefit of our children and grand-children. Please spread the word and feel free to contact us.

Check out this video on our work with our partners at Protect Our Winters.

According to the IPCC (Intergovernmental Panel on Climate Change), the earth has warmed approximately 1 degree Celsius since the beginning of the Industrial Revolution, or 1.8 degrees Fahrenheit. How is this consistent with Burlington winters warming 7 degrees? Of course, there is a lot of local variability in climate change depending on a huge variety of factors. However, there are large scale variations that play a role in the rapidly warming New England winters. Less than 30% of the earth’s surface is located between the 45 degree Latitude lines and the two poles. The Vermont border with Canada is 45 degrees latitude. As you have certainly seen in news reports, the poles are warming the fastest of any part of the earth, but they represent a small fraction of the total earth area. As we are located halfway between the equator and the North Pole, our climate is changing significantly faster than the global average. In addition, winters are warming much faster than summers. The warming of New England summers is approximately in line with the global average temperature increases, so the annual average temperature increase in New England is much lower than the seven degree increase seen in Burlington winters, which are only 1/4 of the annual average.

For the Winter Recreation Climate Nerds 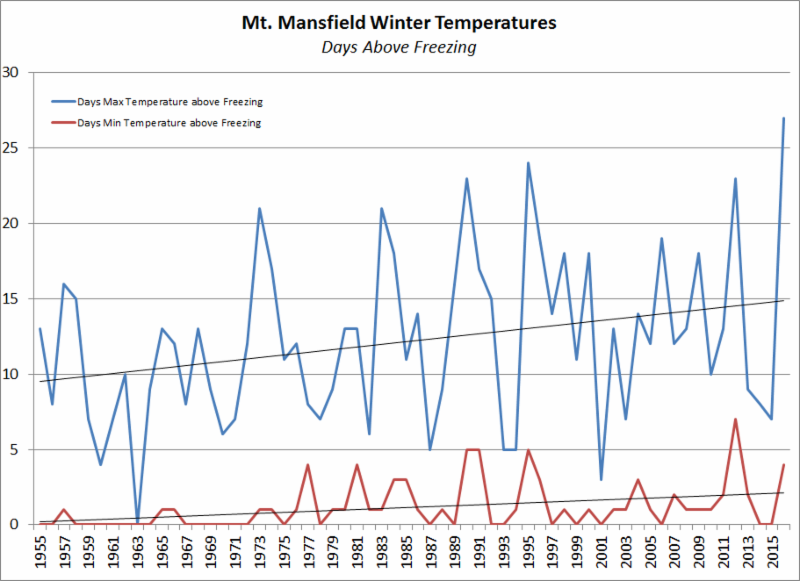 Having grown up in Vermont, the graph I’ve attached pretty much encapsulates my life. In my earliest days, about 1 in 10 winter days got above freezing at the top of Mt. Mansfield, but now that is up to 1 in 6 winter days (trend line on the blue graph). The number of winter days where it has stayed above freezing for the entire day at the top of Mt. Mansfield (red graph) is nearly SEVEN TIMES greater in the last decade of my life compared to the first decade. This means rain events, freeze-thaw cycles, and melting rivers and lakes.

These changes are minor inconveniences for those of us that love winter recreation, and they will impact our economy which is heavily dependent upon winter recreation. However, these changes are just canaries in the coal mine. We are “playing with fire”, as there are large scale climate patterns that could get severely disrupted by continued climate change, but there is a lot of uncertainty about how fast or how dramatically these patterns could change.